Mexico: Ain’t no country for a white boy. Or is it?

With all the drug cartels and kidnappings taking over the news in recent months, Mexico suddenly appears less inviting for tourists from all over the world. Well, the ones who like to venture and explore anyway. The great major of over 22 million of people visiting the country each year don’t travel further than Mexico City or Cancun on the other end of the country. It’s pretty heartbreaking, since the most beautiful parts are hidden in the middle of the Agave land.

Me and Shane have decided to take a week away from work, and since neither of us has previously been to Mexico, and with Virgin flying to Cancun and us having some air miles to spare, it seemed like a logical destination. The biggest mistake however was going there for one week. We haven’t thought this through. Lesson learned.

As a couple with thirst for venturing into the most remote locations we are famous for being able to find Brixtons and Brooklyns of this world even in the safest cities around the world. As it turned out, in Mexico it wasn’t an issue at all. Some people travel for over 20h at a time to put their asses on the beach they could easily find closer to home. We call them the “resort tourists”, because they could be a stone throw away from a medieval castle or Meso-American ruins, and they wouldn’t be interested in the slightest to venture out of the safety of the hotel complex to check them out. If you happen to be one of those people, I judge you.

We were based near Playa de Carmen, but quickly realised there is nothing for us to experience in that neck of the woods, apart from someone else’s hand in your back pocket, and not only to feel your bum. The only thing we participated in that sounded like fun initially, was a trip to Chichen Itza, one of the new seven wonders of the world. The timing was right, because our visit fell shortly before the anticipated armageddon, so if there was one place to see before our days are counted, this was it. Looking back at this quick decision to join a full day bus trip to this magnificent place, I can honestly say, we would have been better off driving there ourselves. The trip was targeted at American tourists who I guess enjoy the journey more than the destination. We managed to hit all the shops on the way, visit a restaurant where the supposedly “local group of people” were trying to amuse us with their local dance, but each of their faces screamed more: “here we go again”, than an actual enthusiasm brought by sharing their culture and customs with others. It was painful. We finally made it to the pre-Columbian city that was one of the best preserved examples of Mayan culture remaining around the world. I wanted to just stand there and breathe the air. All the amazing things than happened on this very land.. heads chopped, blod flowing, no one knows where their sudden influx of skills came from. U.F.O.? God? It’s fascinating subject and one I have been interested since the first time my dad put Erich von Däniken’s books in my hand and said: “Just read them. All of them.” And I did, which wasn’t ward as their are extremely engaging and eye opening. My brain was in a happy place. It was however brutally pulled out of there by our tour guide: “We are meeting back here in 40minutes.” Uhmm.. WHAT? 40 minutes is barely enough to appreciate 5% of this place. I felt cheated. If you are thinking about exploring Yukatan’s hidden treasures: rent a car. Seriously. Do it on your terms.

On the way back from Chichen Itza we got a puncture and we ended up at the local mechanic. He was great and sorted everything out even though we had arrived at midnight (before any of you assumes this is an example of child slavery, this boy was actually his son).

After getting back to the hotel at night, we swiftly planned out the rest of our week to the full, rented a car and started the mexican road trip. Here’s what we saw along the way..

El Diablo Rojo, the rental car that we got to travel across Yukatan.

The Nohoch Mul pyramid in Coba

I am convinced there will be someone overly concerned with health and safety, who will stop tourists from climbing on top of the pyramid. The stones are very slippery and even though it doesn’t look extremely high in the picture, the “stairway to heaven” is actually 42 meters high.

Panoramic view from the top of Nohach Mui pyramid.

Although Mexico has no official religion, almost 83% of population claims to be Catholic.

Acropolis on the North side of the site is the largest structure at Ek’ Balam and is believed to contain the tomb of Ukit Kan Le’k Tok’, an important ruler in Ek’ Balam.

View from the top of Acropolis, Ek Balam

As amazing as the Mayan architecture is, the true magic of Mexico is evenly distributed between the world’s wonders and daily lives of the inhabitants. Around the resorts and hotels you will be exposed to everything you expect to see: sombreros, tequila and clean cutlery. When you are out of the plastic, resort build image of Mexico, you will immers yourself in the daily lives of real people.

If you are lucky, between the barely stable buildings and countless dogs wandering the streets, you will notice the family bond that we all strive to achieve between our closest ones. There is a connection between people I haven’t seen in any other country. Around midday, we were passing many poor huts, miles away from any of the tourist attractions and we saw families sitting outside, at one big table, having fun together and waving happily to passers by. There may not have been much on that table, but I really don’t think they cared. Strange feeling passed through my body.. Suddenly I remember the most cliché sentence we all know: “Money doesn’t buy you happiness.” Looking at those people I could honestly say it was true. Surely they probably wouldn’t agree with me. Mexico is still a poor country and people aim to have better life, they all want a big TV and better house, better car. Looking from a perspective of the citizen of a first world country, I think the phrase “developed countries” is very misleading, and the happiness they would probably be happy to leave behind for the light of a big city is just not worth it.

I wish our spanish was good enough to just stop and sit with them at the table, buy them a crate of beer (seems to be the drink of choice in Yukatan) and just talk. One day..

In the whole time we have spent driving around the peninsula, there was only one person, that wasn’t happy with our presence. We called him a “poncho man”, because he was selling ponchos at the side of the main road from Tulum to Merida. 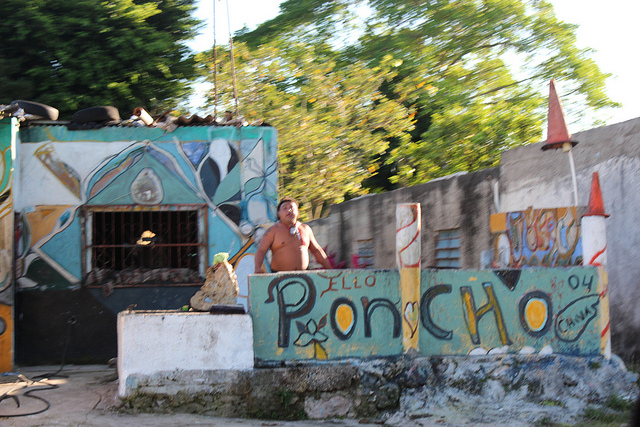 On the way to Ek Balam

On the way to Ek Balam

Usual sight outside of the tourist centres.

Standard dwellings out of the city centres.

There’s a reason Coca-Cola is a household brand. They truly are everywhere.

No state benefits here, everyone works

Apart from the Mayans and drugs, Mexico is famous for it’s countless cenotes: deep natural pit resulting from the collapse of limestone bedrock that exposes groundwater underneath. They were sometimes used by the ancient Maya for sacrificial offerings. If you wanted to visit all of the cenotes, you may need holidays longer than.. uhmm a year.

One of the cenotes we came across by chance.

Shane outside the entrance to Ek Balam

This is probably my favourite photo from our trip to Yukatan. I took it outside a small convenience shop on the way to Merida.

Men enjoying a break from work.

Retirement is a far cry for most of people in Mexico.

The End game of the trip was a town of Mérida, the capital of Yucatán. Although there is an airport outside the city, it’s fairly small and not many tourists explore this part of the Peninsula. It was very clear to us when we arrived, since I happened to be one of the very few blond people. We were lucky enough to be in Mérida at the time of the annual carnival. As predicted, there were no blond people there either.

“..but the good times come to an end, when the high priest Chilam Balam prophecies the arrival of a new religion and of white men, who arrive in Mayan lands with their firearms, their horses and the cross which the defeated will be forced to adore. The old stones are destroyed.” quote from the Corridor Murals in Mérida

Inside the cathedra. Carved Maya stones from ancient T’ho were widely used to build the Spanish colonial buildings that are plentiful in downtown Mérida, and are visible, for instance, in the walls of the main cathedral.

Apart from great buildings and cool carnival, Mérida has got some great people. While wandering around, a local guy came up to us and started chatting. The red light went off, and we automatically assumed he is going to steal our money, or maybe works in a bigger group, and they are going to pick-pocket us, while he is having a friendly chat. We couldn’t figure him out. He introduced himself as Alfonso, and offered to show us around the old town, and since he had been a tour-guide some years back, it was shaping ti be quite a treat. And you know what? It actually was. He told us about the history of the cathedral and the stones stolen from Mayan’s temples that served as fundaments for a lot of buildings in the area. We were waiting for the moment, when he asks us for money, but it never came. At the end of the tour he showed us the “best shop in the area” and.. just left us outside, no hard sale, no passing clients for commission. We were stunned. This is what living in a first word country does to you. You stop trusting people can simply do things out of good heart. The only “business” Alfonso said he had in meeting us? “I want to practice my English, and you guys didn’t look like locals so I thought it was an opportunity.”

Mexico is one of the most amazing places we have seen. From the history and culture to the amazing people we have met along the way. They respect their tradition, have strong family values and are committed to their partners. It’s not without the reason that Mexico is amongst the fop five countries in the world with the lowest divorce rate.

We will definitely be back, but next time hopefully for longer than a week.

Day 13, Flagstaff to Vegas. Meteor, tubing, observatory and.. another detour.

« 8 Qualities of Cultured People according to Chekhov
Eat, drink and never be married: the epidemic of single 30-somethings. »